At A & A Walters we are immensely proud of our heritage and feel privileged to have supported the local community for so long.

The business was founded around 1850 by teenager William Walters, the son of a farmer, who came from rural King's Norton into industrialised Tipton in the Black Country to seek his fortune. He was only 17 when he married a local Tipton girl but on his marriage certificate he pretends to be 21 – most likely so he did not have to seek his father’s consent. The business was originally a wheelwrights and the premises were situated under the old Navigation canal bridge, Tipton where William used bellows to keep his forge going to make his wheels in all weathers.

By the beginning of the twentieth century, William’s two sons, Arthur and Alec were running things and it is these brothers who give the business its name. They moved premises to a residence in High Street. Coffins were made alongside cartwheels and gradually, as the motor car overtook the horse and cart as the main form of the transport, the funeral directing side of the business became paramount. 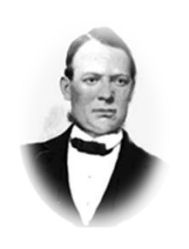 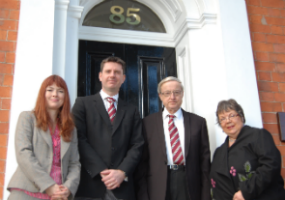 In 1939 the business moved premises for a second time to Hall Street, Tipton. Throughout the Second World War Arthur’s eldest son, Sidney, kept the business running whilst his younger son, Ernest, did service in India with the RAF. Ernest’s wife, Nancy, helped out driving the funeral limousine which was a huge Daimler although at just 5ft 1 inch tall she could barely see over the steering wheel!

Sid and Ernie ran the business together during the late 1940’s, 1950’s and 1960’s and many of Tipton’s elder residents remember both men fondly from this time. Sid was a particular character; a proper ‘jolly undertaker’. Being surrounded by death certainly made him live life to the full and he enjoyed dancing, card games, dog racing, drinking, and lots of attention from the ladies despite a long and happy marriage to wife, Kath. Ernie was much more sensible and kept the business running smoothly whilst Sid enjoyed the high-life.

The current managing director, Mick Walters (son of Ernie), joined the business on January 1st 1962, aged 15. He and his wife, Christine, became partners in the business in 1979, just a year before Sid passed away. Ernie continued to work alongside his son during most of the 1980’s. He worked up until three days before his death in August 1987.

During the 1990s the business went from strength to strength, especially with the re-introduction of Horse-Drawn Hearses in the local area. By the beginning of the new century it was becoming apparent that the business had out-grown its increasingly cramped premises in Hall Street and an offer to purchase a regency property in nearby Dudley Road was made. In December 2002 the business made its third move to The Old Manse, 85 Dudley Road, Tipton. Mick’s son-in-law, Jeremy Hodges, oversaw the move. The old premises at Hall Street have since been converted into garages for the fleet of vehicles.

In September 2003, Mick’s daughter Rachel left a career in teaching to join the business full time. Despite being a great-great grand-daughter of William, she is the only representative of her generation in the Walters line, having no siblings, first cousins or second cousins. However, in February 2007, the family line was set to continue for a sixth generation with the birth of Rachel and Jeremy’s first child, Evie. March 2010 saw the birth of Rachel and Jeremy’s second daughter, Francesca. 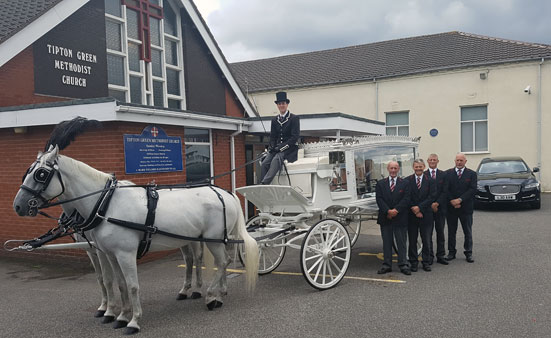 In 2014 A & A Walters opened a branch office in Bilston Street, Sedgley under the supervision of Mr Andrew Matthews.

In 2017 a third branch office opened in Dudley Street, Bradley, Bilston. The former home of 'Ivy's Florist' for many years has been lovingly converted to create a beautiful funeral home complete with large and spacious Chapel of Rest.

In 2019 we relocated our Sedgley branch office to 8-10 High Street. We now have a Chapel of Rest on site as well as private customer parking at the rear.

Preparing for a funeral service

We answer some of the common questions people have about what to do and what happens at a funeral...

We will contact you after the funeral to explain the next steps to take and provide any additional support you may need. If you have a grave and would like any advice on memorial masonry we can help.

Do you know who you are dealing with?

Have you enquired whether the Funeral Director you believed to be 'independent' is still family owned?

Ownership of many Funeral Directors is not as transparent as it should be and often you have to look very carefully to establish who you are dealing with. At A & A Walters you can rest assurred that we are who we say we are.